My Life Between Two Cultures
(Dedicated to My Children)

"The Judaism in my Life"

I grew up in Derbent, Soviet Union a product of two Jewish cultures, Ashkenazi and Sephardic, which to some extent reflects the time that I lived there.

My father was European Jewish (Ashkenazi); and my mother was of Mountain Jewish descent. Mountain Jews are Jews who lived on the eastern and northern slopes of the Caucasus Mountains. They are the descendants of Persian Jews from Iran. This intermingling was from two different cultures that are branches of one religion. The Jewish religion played a big part in my life and later profoundly affected my art. My parents kept Shabbats and celebrated all religious holidays.

My father, Joseph (Moishe) Tsvaygenbaum never held any high position in our city. He, as well as my mother, Mirvari, spent many years working in the Derbent cannery. My father, due to his erudition and religious education served as a spiritual bridge between the European and Mountain Jews. Both, the well-to-do and the poor people in both communities respected him. Young people and old turned to him for advice. The Mountain Jews repeatedly asked him to become their rabbi, but he would always turn them down. My father would have had no problem accepting the role had it only been as spiritual leader, but the Rabbi in Derbent also served as the shochet (butcher) and my father was too squeamish to perform that task.

Most of Ashkenazi Jews living in Derbent after World War II were refugees who had lost loved ones in the concentration camps. Uprooted by the war, they saw my father and his religious knowledge as a link to their past.

The spiritual leadership he brought them gave them a sense of connection to who they were and who they had been. This was especially true on Yom Kippur ("The Day of Atonement") when my father led a prayer service for the Ashkenazi Jews in a small room of the Derbent synagogue. On this day, it is traditional to read the Yizkor - a memorial prayer for loved ones who have died. When my father read it, both he and the rest of the community would sob, remembering all those murdered in cities, ghettos, and concentration camps during the war. His role on the Day of Atonement was invaluable to the community.

I often wondered why Ashkenazi Jews on Yom Kippur never prayed alongside the Mountain Jews during the Yizkor prayer. They always asked my father to read the prayer in a separate room. Later as an adult, I realized that Ashkenazi Jews - including my father-- wanted to pray and cry in the languages spoken by their mothers and fathers. Reading with my father in their familiar dialect of Ashkenazi Hebrew rather than the Sephardic Hebrew that the Mountain Jews used was for them a kind of prayerful meditation and nostalgia. They received comfort from the Yiddish language.

This language difference is one reason for the existence of two communities, despite their shared religion. In Derbent Ashkenazi Jews lived sometimes in a common housing courtyard with Mountain Jews. My father was the last Ashkenazi in Derbent who regularly went to synagogue all year long.

On the eve of "Yom Kippur", my father held a Jewish ritual, "Kapparot." My father recited the prayer, as he swung a live chicken over our heads three times so that our sins symbolically passed to the bird. He swung a rooster above himself, my brother, and me, and a hen over my mother and grandmother. When my father swung the bird above our heads, they usually squawked loudly, especially the roosters. I was always afraid that they would peck me, but fortunately, it never happened - my father kept them far enough away from my head.

Whenever the Jewish ritual Kapparot comes to mind, my thoughts always return to my father, and to all the spiritual elements that I inherited from him. Later, as a grown man, in tribute to the ritual I started to paint "Kapparot."

Unfortunately, so far, the picture is unfinished. My youngest daughter Esther and my friend Les posed for this picture with his rooster. I am still not satisfied with the process of the development of the work. However, one day, I hope to complete this picture.

After the completion of the ritual, my older brother Yedidya and I carried the chicken to the synagogue, to a butcher. When I was young, I usually went with my brother; but when he went to the city of Makhachkala to continue studying, going to the butcher was just my responsibility. The first time I independently carried chickens to the butcher was when I was 8 years old. It was about a 25-30 minute walk from my house to the Derbent Synagogue on the street Tagi-Zade, 99.

When I came to the synagogue, the butcher took the roosters out of my hands. After reading the prayer in Hebrew, he killed them painlessly with a sharp knife to make them kosher. After a few minutes as the blood flowed from my chickens, the butcher took them from hooks over a large sink and put them back in my bag. The butcher spoke with me a few minutes about my parents, then said goodbye to me and went to serve other people. I then walked home with the kosher chickens. In 1997, based on my vivid impressions of these episodes I painted "The Shochet with Rooster."

Soon after I came back home from the synagogue, my grandmother, Bolbike, asked me to take one of the slaughtered roosters to a poor neighbor. Her name was Shegeri. My grandmother told me to give the donation to her personally. She lived in the house of her brother, two streets behind ours, along the ramparts. It was a Mountain Jewish family. When I came to this house, I began to knock on the cherry-colored wooden gate, but no one opened it. Suddenly I heard a woman’s voice in the Mountain Jewish language: - "Open the gate."

After a hard push, I opened the gate. For the first time, I saw my neighbor, Shegeri. Both of her legs were paralyzed. When I went into the yard, she was preparing newly shorn wool for hand spinning. Shegeri was a grown woman, about 60 years old. It was hard not to notice her kind and beautiful eyes. Her face showed few of the deep wrinkles of old age. She lived in a courtyard in an adobe hut, built right next to the gate, just in front of the (communal) toilet. Her hut, approximately four by six feet long, reminded me of a doghouse. Its clay floor was damp. She had neither doors nor windows. An old, hole-filled piece of baggy canvas served as the door. For lighting, she used a kerosene lamp. She cooked on a kerosene stove. Like most Caucasian women of the time, she wore a kerchief on her head. Hers was black, threadbare and discolored from years of wear. She sat on a small pillow, with piles of old junk scattered around her. They were mostly old rags, which she huddled under on cold days. Despite the conditions in which she lived, I never saw her express anger at her life.

I handed her the gift from my grandmother, a slaughtered rooster for Yom Kippur. Shegeri was very polite and grateful for it. In leaving, I said goodbye to her and closed the gate behind me. Suddenly, I burst into tears. My neighbor, noticed me crying and asked me why, I did not say anything to her and ran away to home as fast as I could, still crying.

My mother was in shock and bewildered by my weeping. I told her about Shegeri’s living conditions, about her miserable existence in an adobe hut that had been built for her right next the gate. My mother embraced me and wiped the tears on my face. She apologized that grandmother had sent me to Shegeri and sympathized with me for the painful poverty I had seen. For me, then 8-years old, the Shegeri’s living conditions revealed a reality I never knew existed. This was the first time I witnessed such human misery. Seeing Shegeri was a life lesson for me, it gave me a perpetual fear of poverty. This feeling has never left me.

Later, at the request of my grandmother or my mother, I went many times to Shegeri. I loved to bring her treats. When I came to her, I always felt the importance of helping the poor. I always left her with good feelings. Although still a child, I understood that helping someone in need brings no less joy and satisfaction than receiving help from other people. The more we give the more we receive.

Shegeri’s brother had five children, but only the youngest niece, Bojis, was very close to her. No one else paid attention to her. For the rest of the family, Shegeri just did not exist.

When Shegeri died, my grandmother bathed her body according to Jewish tradition. My grandmother often washed the dead; she did this for many in the community. She believed that it was particularly noble to wash the body of the tormented life of the neighbor. It was hard to realize that I would never again see Shegeri, this lovely woman who was so generous with her blessings.

My life and the lives of my children are closely intertwined between the secular modern life and religion. The Jewish religion helped me keep my cultural identity, uniqueness, and not get lost in a big bouquet of different ethnicities. The Jewish religion helped us to preserve the beauty of our traditions that we inherited more than 3,000 years ago.

I always wanted to pass my baton that I got from my parents to my children in a relay race of new generation. I was always wary not to drop my baton in my life race. I am happy to realize that I made it. My children are holding tight to their religion’s value, I am sure they will pass their baton to the next generation. The Judaism in my family will survive, and always will have an important place as it did many generations ago. 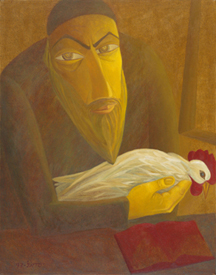 The Shochet with Rooster 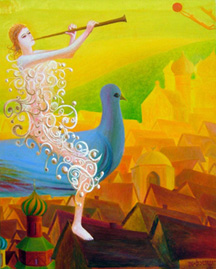 Flight of the Soul 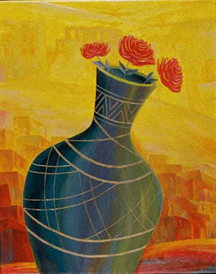 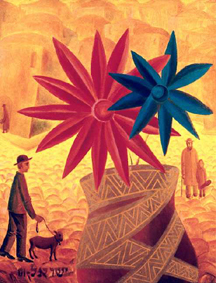 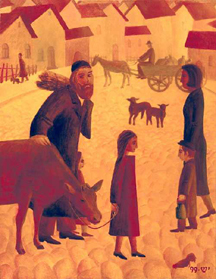 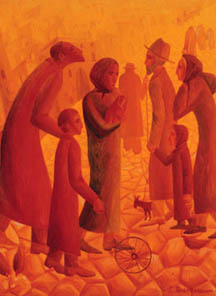